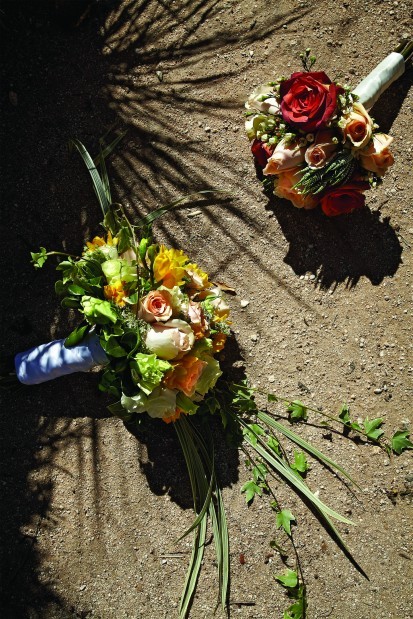 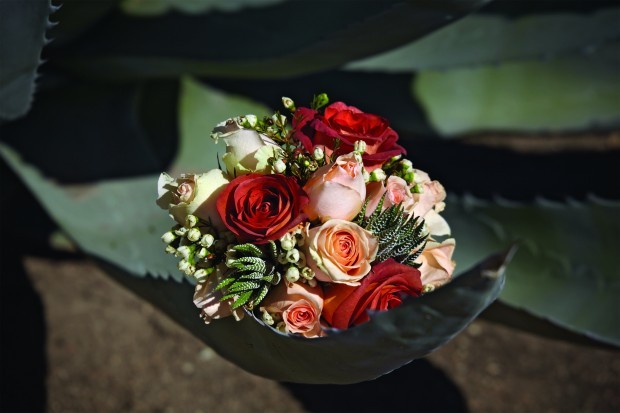 When it comes to weddings, few design elements make as big an impact as the floral arrangements. They are also one of the aspects most influenced by the latest trends. As the times change so do the styles of bouquets and table settings. And as we enter 2011 wedding goers can expect to see arrangements that reflect a more natural and modest aesthetic than in previous years.

"We are trending away from the opulent and sophisticated to the more traditional, more comforting look," says Karin Binnie, owner of Flowers by Karin. Binnie sees 2011 as a year where the "cozy and inviting" colors like emerald green, dark cyan and aged gold will dominate. "The colors are warm. The colors are from nature," she says. Colors representing Tucson's beautiful sunsets - shades of red, orange and yellow - are also hot this season.

Chistie Spencer, owner of Focus on Flowers, adds that along with the colors of nature, flower arrangements are influenced by a host of textures provided by botanical components like dried lotus pods, coffee berry, even artichokes.

Texture plays a part in Binnie's designs too. For a recent client, she fashioned a centerpiece from the pads of the native prickly pear cactus – cacti and other succulents native to the Sonoran Desert are finding their way into Tucson weddings more than ever before, a trend echoed by Cindy Morgan, Design Manager at Inglis Florists.

Binnie will even incorporate live plants into centerpieces and other arrangements, which after all the guests are gone, can be planted and grow with the couple, forever serving as a memento from their special day.

Along with color and texture, Spencer also sees a trend toward simplicity. "But simplicity doesn't mean boring," she asserts. "The designs are still elegant." And imaginative.

For one down-to-earth client, Spencer is turning burlap sacks into table runners accentuated by French tulips adorned with curly branches and polished stones. "We're calling it ‘eclectic chic,'" she says. "It's inspired by Tucson."

Morgan was also inspired by Tucson when one bride wanted bougainvillea wound into her scheme. With the help of friends, she collected the thorny, woody vines that thrive in the Old Pueblo and created a look that was both natural and beautiful.

Whether using cacti or tulips, coffee berry or branches, wedding bouquets and floral arrangements are ultimately there to enhance the atmosphere. While current styles provide a good starting off point for deciding on wedding flowers the final design should be personal to the bride and groom and as unique as they are as a couple ... because one couple's burlap sack is another's table runner.

A private winery tour for 12, a $300 gift certificate to Tuxedos on Broadway, a dream furniture giveaway, and wedding day hair and makeup, AND MORE!

As Tucson's premiere bridal event, the Tucson Bridal Expo provides in-depth information for brides to be. With a variety of exhibitors, you are sure to find vendors that fit your needs! Come join us and let us help you put together the perfect wedding!